The Second Round and Other Things 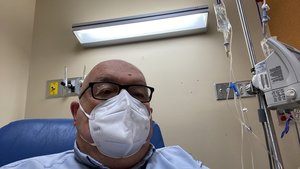 I won’t be doing a blog on every one of my 6 treatment sessions, but I thought I would let you know about this one. Today I had my second course. You may recall that for my first one I was admitted to hospital. I was very sick and when I look back on it now I think I was near death…at least I felt that way. I got through it. That was three weeks ago. The first week after that chemo session was rough, but the past 10 days to  2 weeks I have been doing great. So I entered this second session of chemo feeling very well, not feeling sick. It was also different because it was done at the Ambulatory Treatment Clinic, as an outpatient, not admitted to hospital. Another huge difference was the first drug, which was given slowly IV over about 6 hours during my first session, was given by subcutaneous injection over 6 minutes!. Then the other drugs were given over about two hours or so. I did not get nauseated. I felt nothing untoward and we  went home at around 11AM this morning (went in at about 8:30AM).  So all very different.

So that’s all I’ll be saying about today’s treatment. I feel fine.

Now about my writing. I have been stuck on my book “2066” for months. I decided to put it aside and have started another  manuscript of a novel called “Jack and Gillian: A Newfoundland Novel”.  A large part of it involves the crew of a longliner.  I don’t know much about longliners. Never been on one. What I do know about longliners could fit on about a half page double spaced!  What I don’t know could fill volumes. But a good friend and colleague of mine, Dr. Farah McCrate, happens to be married to one Gregory Careen, who is a longliner captain, and has two of them, or at least skippers two of them.  So Glenda  and I have invited them to our cottage in Trouty and I will spend two days picking Gregory’s brain about longliners … the politics, the financial aspects around the fishery, the process of fishing the different species, the dangers, the experience.  And of course we’ll enjoy some wine and beer, and barbecues, and do some hiking, and stuff.

On Saturday past (April 23)  Matt Lloyd and I drove to Musgrave Harbour, a five hour drive,  to pick up a 27.5 trailer he and Jane were purchasing. Great road trip. Got it back to St. John’s and parked in their driveway in Torbay. Plan is for them to get it all set up and maybe go on a camping trip and then in a few weeks take it to Trouty where it will be parked on our land  when not being used by Matt and Jane and the kids.  For us it means we will have access to it to use as a place for people to stay when we have visitors and there are too many to all stay at our Trouty house…. a bunky, it is generally called. 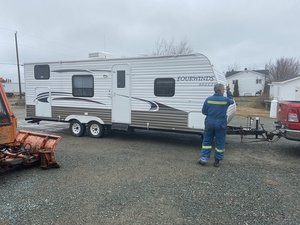 And finally, we have discovered today that Peter (our son) and his family  are coming for a visit for a week in late June. Glenda  and I are so looking forward to it. We’ll spend time with them both in St. John’s and out in Trouty.

Greetings, Marshall I am glad to hear that you are dealing with chemotherapy well. I wish you success in your new book-writing efforts. Greetings to you and your family, as well as to all of your friends.
Zaim

Hi Zaim. Great to hear from you. Glenda says ‘Hello’. Hope all is well with you

I’m so relieved that this treatment has been kinder to you than the first. I’m looking forward to your next book, it’s great that friends can give you so much background. How fantastic that you will have the trailer at your disposal. I’m sure you are counting the days until Peter, Kate and the children arrive. Have a restful, enjoyable weekend.

Hi Jackie. Thanks for your comments. And yes things are going so well for me. Better than I could have hoped.

So glad you’re doing well.Sending positive vibes your way.Say hi to Glenda and your family.

I feel the vibes. 🙂 Glenda says Hi back.

Glad to hear this round of chemo went much better

Nothing like family and good friends to make you feel wonderful

I didn’t know about your health problems, but I’m happy the treatment is going well. You are in my thoughts.

My wife Mary (nee Piercey also of Belleoram) are happy that your 2nd treatment went well and you are feeling better after this treatment. A positive outlook can help the healing process. Looking forward to your next book release,

Thanks Phil, to you and Mary. I’m working on the next book as I said in my blog. Probably be out in the fall.

Great to hear this treatment was easier. Warmest wishes for a speedy recovery.
Have a wonderful summer with your family and grandchildren.

Thanks Shabnam. Hope all is well with you.

Hi Marshall. Glad to hear your second treatment went well. You are such an inspiration..you are taking this all in stride and living life to the fullest. Such encouragement for those about to travel down the path of treatments.

Great to hear that the treatments are going well, and that they’re not slowing you down too much. Good that Peter and family will be visiting – maybe he and Joel will have time to touch base.
Hi to Glenda!

Thanks. Glenda says Hi back

Hi Dr. Godwin. Glad to hear that this round of chemo is going better than the first. Ur in my prayers. Keep safe!

Hello Marshall, glad to know your 2nd treatment went much better than the 1st. It is confirmed that my biopsy was positive. Waiting to see an oncologist to know the path forward. Wishing you all the best that life has to offer & always stay positive! Jeanette Taylor

Hi Jeannette. I wish you all the best. The oncologists at the cancer clinic are wonderful people, and you’ll get the best available care. There are lot of us in this situation but the whole cancer environment and success of treatment is so much better now than it was even 10 years ago.
Marshall

Hi Dr Godwin; happy to read you are on your way to good health again! Hard to keep a good man down! Good luck with the research of ur new book!

Thanks Marilyn. You have a good day.

Great to hear that the second treatment has gone well. The long liner plan sounds very interesting- will you get the opportunity to travel on one at some point?

I am hoping to get out on one, yes.