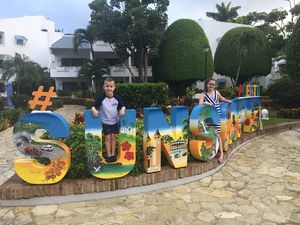 On Friday January 17, 2020 when the wind and snow raged over eastern Newfoundland, I was sitting by the pool at Sunscapes All-inclusive Resort in Puerta Plata, Dominican Republic sipping on a Pina Coloda or some other Caribbean drink.

I missed it! I missed Snowmageddon!! I love snow storms…. sitting inside in the warm while the fury of storm rages outside. Of course, that’s easy for me to say. This one was a bad one and maybe for many it was more frightening than fun. But still, in the warmth of the Caribbean, I watched the day of the storm and the first few days of the aftermath unfold on Facebook, and felt like I had missed something important. Two days later, stuck in a hotel at the Toronto airport, my disappointment changed to frustration. St John’s was in a State of  Emergency, the St. John’s Airport was closed down, and I was going nowhere.

Glenda  and I had joined Jane (our daughter) and her family for a January getaway to the warm Caribbean. Jane loves the heat and a week at an All-Inclusive Resort is right up her alley. Glenda  and I went along with her and Matt, and the two grandchildren, Charlotte and Spencer, to “help watch the little ones”… Glenda had this nightmare they might get snatched.  We don’t dislike the warmth but we like 15-20 degrees more than 25-27 degrees.  We are walkers and explorers rather than hot sun and beach people. But I must say it was nice! And with four sets of adult eyes watching the children all the time, snatchers didn’t stand a chance.

The airport in St. John’s eventually opened and we arrived home on Wednesday January 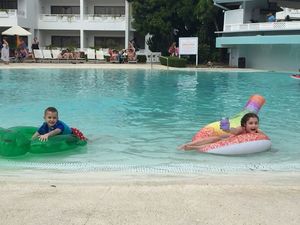 22, 2020. Matt and Jane had snow to clear up, of course, but Glenda and I had no such issue …we live in a condo, and everything had been cleared. But St. John’s was a mess. A big shout-out to the City Workers who did, and are still doing, a great job clearing things up.

Meanwhile, back on the Rock!!!! 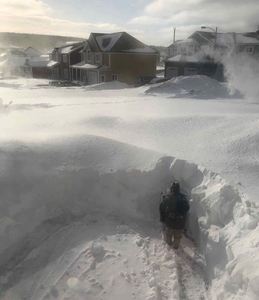 i felt like I was missing out as well but only wanted t go back for an hour to see it and then leave again lol You may get your wish for a storm this weekend if the other storm bomb tracks near you!

Funny,isn’t it. We all want to be here in Newfoundland when “stuff” is going on. I understand that completely. It’s called FOMO.