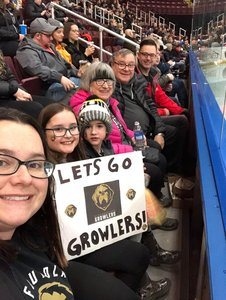 To be honest, I’ve really only been to 3-4 live hockey games in my life (except for kids and grand kids games).  Last night Glenda and I went to see the Growlers game. They were playing the Worcester Railers. The Growlers won 6 to 3. But the win is not why I’m blogging.  Jane and Matt and their two children, Charlotte and Spencer, were with us. The children had made up signs saying Go Growlers Go. 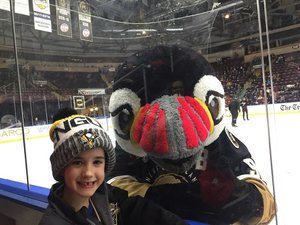 We were sitting right down by the boards at the blue line. I couldn’t believe how the kids got into the game. Waving their signs, shouting, jumping up and down. It was a lot fun. I enjoyed last night so much … we all did. The hockey was great. Buddy the mascot (a puffin) came right over to where we were and high-5’ed Spencer right through the plexiglass. We all had chips or poutine, of course.

Kelly and Tamsyn Russel, a well-known father and daughter musical group, played at centre ice at one of the intermissions and then played on and 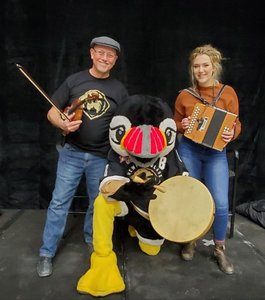 off through the game for short periods to get us all riled up and feeling like Newfoundland patriots with their fiddle/accordion combination.

Pooley, #12 on the Growlers, got a hat-trick … and then scored in the open net with one second left in the game…hat-trick plus 0ne. But the game seemed to end 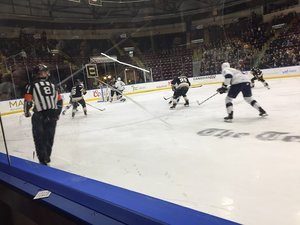 on a sour note. The Railers left the ice as soon as the whistle blew ending the game and didn’t do the usual skate-by the other team members to say “good game” and touch gloves. No one knows why. It didn’t seem to be a particularly angry game, no fighting, the referreeing seemed fine. In fact, the Growlers got many more penalties than the Railers. Anyway, Jane spend 5 minutes after the game explaining to the kids how it was important to be good sports and even when you lost you wished the other team (person) well.  One comment  heard by someone disgusted by the Railers actions was “Bunch of Republicans!” 🙂

But bottom like for me is that I really enjoyed the night and both Glenda and I said we should do it more often. Perhaps in 2020 we will.

We did in deed. And Happy New Year

Lovely time. Happy New Year to you and family.