The 23rd of December, the day before Christmas Eve, Christmas Eve’s Eve … that’s Tibb’s Eve in Newfoundland and Labrador. Before the war — WWII that is — Advent was as bad as Lent when it came to being a solemn time, a time to be sober. There could be no drinking until Christmas Day. The story goes that after the war, on Newfoundland’s South Coast — specifically in a town called Harbour Breton — a bunch of people  on December 23 decided they couldn’t take it any more. They had to have a drink. So they came up with a ‘day’, a festival, — the festival of St. Tibb. They decided it would be December 24 and since it was a saint’s festival day well they would have to celebrate it — with a drink. But that wasn’t good enough, so it was decided that the festival of St. Tibb must have an “eve” like Christmas Eve so they designated December 23 as St. Tibb’s Eve (or Tibb’s Eve, for short), thus pushing the prohibition of having a drink back by yet another day. So let the festivities start, today, Tibb’s Eve, December 23, 2019. That’s when we start celebrating Christmas in this land of stories we call home.

Now there isn’t really a St. Tibb in the Christian Calendar, so where did the name come from? Turns out a tibb, in the time of Shakespeare, was a promiscuous, lose-moraled woman. Ingenious!  The women called tibbs probably drank a bit — to go along with their lose-morals. What a better name to allow men the excuse to start drinking two days in advance of Christmas. 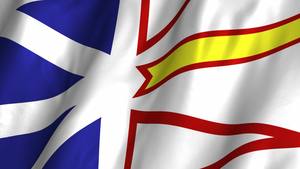 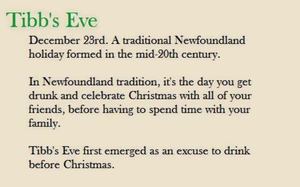