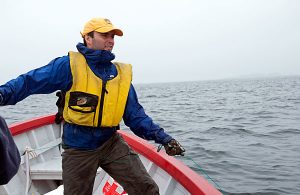 With the final book of The Beothuk Trilogy delivered to the publisher, I am thinking about my next writing project. The picture on the left is of my son jigging codfish during a visit to Newfoundland a couple of years ago. My next novel is titled Home to Liza and is a story about fishing families in a small outport town in northern Newfoundland. The plot revolves around a young woman named Liza (short for Elizabeth) and the young man she loves, who ends up in prison for manslaughter. I won’t say any more because I haven’t got it all sorted out yet.  I am also working on a comedy novel called Charlie Freake from Silly Cove. You have to put your mind in a completely different place when writing comedy so it is taking me awhile and I am writing it in stops and starts. I have plans for several more novels as well but the details are vague in my mind now so I won’t say anything.

Anyway, consider buying Belle Maro and  The Mark of Time so you will have read the first two books in The Beothuk Trilogy and are ready for the final installment — The Warm Place — when it is released in the summer of 2013.