Felsenmeer is a word with German origins. It means ocean of rocks or sea of stones. When Glenda  and I came back home to Newfoundland in 2005 we looked for a word that would be unusual or even unique, that we could use to label our activities and property.

Anyone who has walked the barrens of Newfoundland, especially the interior of the Avalon Peninsula, has seen felsenmeers, even if they didn’t recognize them for what they were. Or if you have climbed Iron Skull, a mountain near Belleoram in Fortune Bay, the top 1/3 of the mountain is full of loose rocks…. that’s a Felsenmeer. Or if you have climbed Gros Morne! Felsenmeer is to be distinguished from talus which is the collection of rocks at the base of mountains which get there from falling rocks. A Felsenmeer is formed by the breaking up of exposed rock surfaces into multiple rocks due to the freezing and thawing and freezing of water in the cracks of the rocks.

One of the best known, and most striking, felsenmeers in Newfoundland is near the Town of Elliston on the Bonavista Peninsula, Trinity Bay side. 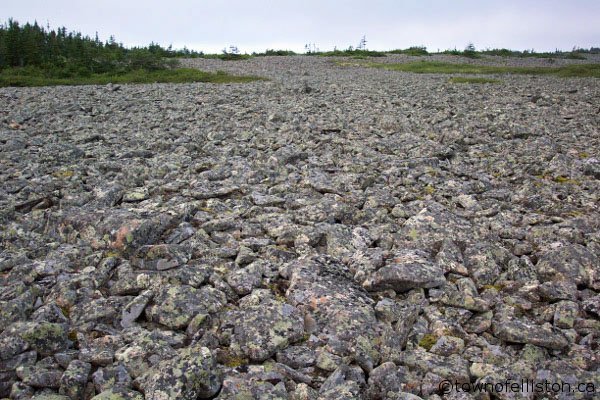 Great work , Marshall. I had no idea what felsenmeer meant, so nice to know. Enjoy the time with Peter, Kate and the children.

Learn something new everyday…and now I Know…Thank You